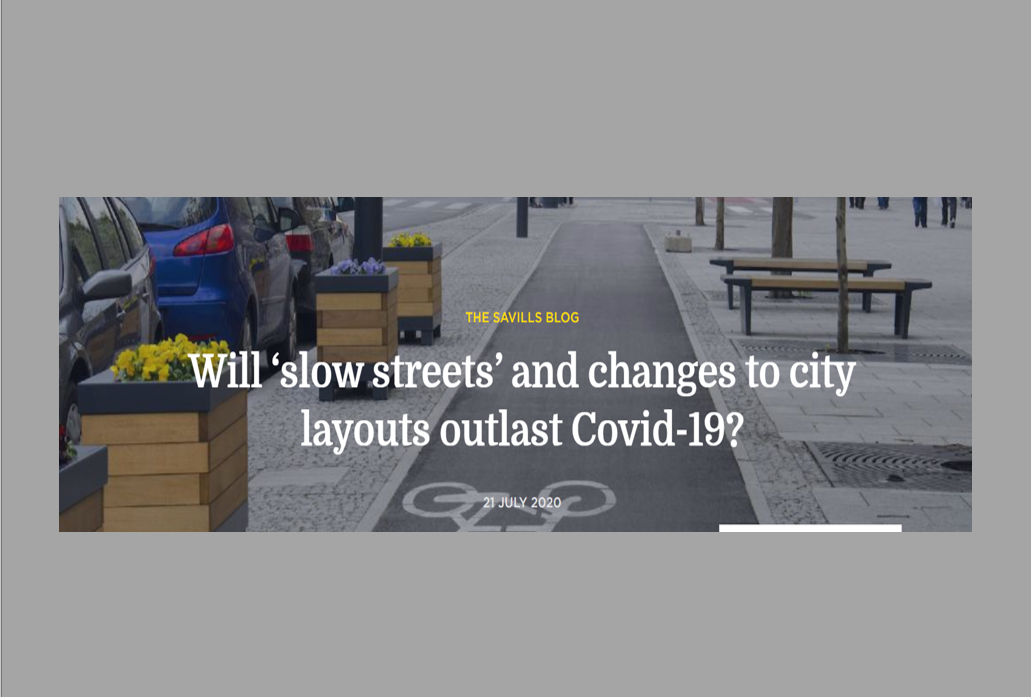 Debates around Covid-19’s long-term implications cover everything from working from home and international travel to demand for green space. While speculation over consumer behaviour is often at the forefront of conversations, changes to the structure of cities are already underway.

From Paris to Bogota, cities have introduced measures to encourage and enable more walking and cycling, reallocating road space to people on foot and on bicycles to allow for social distancing amongst populations still wary of overcrowded public transport, while dissuading people from turning to cars. This has become known as the ‘slow street’ movement.  Many changes were intended to be temporary but are now being made permanent, such as keeping ’emergency’ bike lanes for good. Other cities are now fast-tracking permanent cycle and foot paths, many of which had been in the planning process for years.  But to create cites with fewer cars and less reliance on public transport, layouts need adjusting.

Neighbourhoods need to meet most people’s daily needs just a walk or cycle away, including schools, groceries, parks and workplaces. This isn’t new. Portland started to create vibrant 20-Minute Neighbourhoods over a decade ago as part of its Climate Action Plan. The idea was then adopted in Melbourne in its Plan Melbourne 2017-50. Anne Hidalgo, the Mayor of Paris, was recently re-elected with the ‘ville du quart d’heure’ a key pillar in her campaign.

For offices, Covid-19 could be the catalyst for a shift in company’s location strategies to include non-core locations, leading to a more hub-and-spoke approach by occupiers, with city centre presences but also regional and local offices. With a focus on accessibility by foot or bike, offices will need to offer more bike storage and showering facilities.  Shopping streets are likely to evolve to include co-working space and more residential units. Home working isn’t always possible or desired, as demonstrated by people working in coffee shops pre-pandemic. Flexible offices on high streets offer a solution to those wanting to work locally but not at home. Residential development should be in locations forecast to see employment growth, with amenities accessible by foot or bike. Like offices, bike storage will become more important in homes, as will community facilities.

While new foot and cycle paths are relatively straight forward, achieving local neighbourhoods will take time. Many cities have evolved over hundreds of years, and new developments or changes in use won’t happen overnight as planning systems grapple with the changes.

Another challenge is to balance residents’ needs with sustainability as cities continue to grow. More road space for bikes means less for cars, a concern for some, especially in cities without good public transport. Investment in public transport and park and ride schemes is needed alongside neighbourhood transformation.  The drive to create sustainable cities to combat climate change and meet the Paris Agreement goals hasn’t been stalled by the pandemic. If anything, people appreciate the environment more.

In April, global carbon emissions fell by 17 per cent, skylines that hadn’t been seen in years came back into view and wildlife surged. Although the International Energy Agency is forecasting an 8 per cent drop in carbon emissions in 2020 relative to 2019, this coincided with the biggest economic downturn for decades.  Stopping the economy is not the way to a green future. Instead, governments across the world have an opportunity to recover from this recession with a focus on sustainability, including addressing how cities operate.


Is wearable technology a solution for delivering health and wellbeing in the home and office?